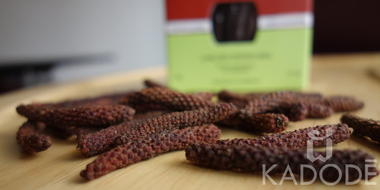 The Long Pepper (piper Retrofactum) originates from India like most varieties of pepper. Nowadays, it is widely cultivated in Java, Indonesia and used mostly in Chinese and Ayurvedic medicine. In Cambodia, some farmers cultivate the long pepper in the region of Kampot. The particularities of the soil and terroir gives this Long Red Pepper a unique taste. However, unlike Javanese Long pepper, our Long Red Pepper is harvested only when the berry is very ripe, maximising all the complex aromas of this rare spice. KADODE LONG RED PEPPER has a more pungent taste than black peppercorns. It produces a stronger heat, comparable to that of red chillies. KADODE LONG RED PEPPER develops further complex flavours of dried red berries, cardamom and nutmeg. KADODE LONG RED PEPPER has earthy and peppery base notes reminiscent of our black pepper, which means it can be used as a replacement in many dishes. With an element of sweetness it also makes an ideal accompaniment with desserts, such as cacao. In addition it bonds perfectly to link a sweet and salty dish.

How to prepare Long Peppercorns

Break the long red peppers in half and crush with a pestle, twisting as you go. As they become finer, use a circular motion to break them down even further.
Alternatively, use a grater to simply shave the long pepper.
Or just cut them with scissors into tiny pieces of less than ½ cm and use in your pepper or spice grinder as normal.
Last but not least, just cut the long pepper in half and add it to your slow cooking dishes